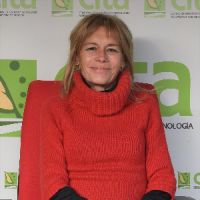 Ana Palacio is Researcher Scientist at CITA. She was graduated in Biology at
Universidad of Valencia (1992) and obtained her PhD in the Universidad of Valencia
(1999). After defending her PhD, she got a contract in the University of Riverside (US)
(January-July 2000). Later she got a contract at IVIA (Spain) (August 2001-April 2002).
In May 2002, she got several contracts in CITA, and at present time, she has a position as Permanent Scientist. Ana is responsible of the research line on Plant Bacteriology at CITA, that is focused on the study of plant pathogenic bacteria, mainly in Xanthomonas arboricola pv. pruni, but also in Erwinia amylovora, Xylella fastidiosa, Dickeya spp., among others. Her research is mainly addressing line of “Detection, identification and characterization of plant pathogenic bacteria”, included in this proposal. She has also reported first detections of two phytopathogenic bacteria in Spain and three new bacterial hosts.